After our interviews with Yoshinori Sato and Leo Sato, here is our last interview of the contemporary Japanese film festival Kinotayo, and not least, since it is the great producer Kazuhiro Sugawara that the team had the chance to meet. Kazuhiro Sugawara have worked body and soul in the development of dramatic and elegant films, including Over The Fence in 2016, Sketches of Kaitan City in 2010 and then the last And Your Bird Can Sing, released in 2018 and directed by Sho Miyake. It is this last jewel that was broadcasted on the big screens of the Kinotayo festival. Adaptation of one of Yashushi Sato‘s works, And Your Bird Can Sing comes closer to a fiery but wandering youth, a youth interpreted by three actors with a fascinating game. For this last portrait, Kazuhiro Sugawara comes to wear the colors of this collaboration which we enjoy! 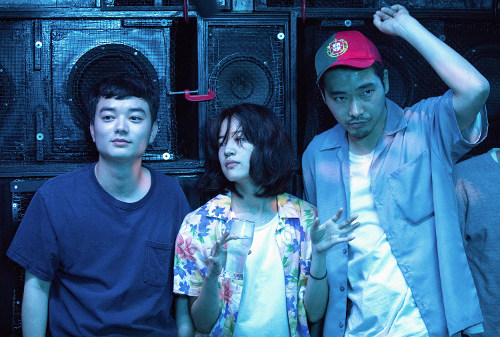 Hello, can you start by introducing yourself?

Kazuhiro Sugawara: My name is Kazuhiro Sugawara, I live in Hakodate, on the island of Hokkaido. It’s a small fishing town where I have my [own] movie theater. While managing it, I’ve been producing films for over ten years, and And Your Bird Can Sing is my fourth film as producer.

Can you tell us about your training as a producer and especially for Over The Fence?

Kazuhiro Sugawara: I never trained as a producer, I learned on the field. The first film I produced was Sketches of Kaitan City. It’s a movie I sincerely wanted to make. I learned the role of producer while producing this first film. I don’t know if I really learned a way of producing, but I wanted above all to lead this project.

Tell us about And Your Bird Can Sing and its origins?

Kazuhiro Sugawara: You mentioned Over The Fence, my third film as a producer. For my first three films, I had almost the same team, and for my fourth film, I changed teams, and I also wanted to produce this film as an independent film, and not to use the production committee system, which means I wanted to have as much control over the film as possible.

How did you experience this collaboration with the director Sho Miyake?

Kazuhiro Sugawara: The original novel that I brought was written in 1980, a long time ago. I wanted to change the era a bit and update it in our time. Of course, this is a story about young people and I wanted to entrust the making of this film to a young director who is about the same age as the characters. So I started watching feature films made by these young directors and came across an independent film, Yakuta Tazu by Sho Miyake. The young characters who are depicted in this movie are very similar to those who appear in the novel. So, I thought that maybe we should entrust the making of this film to Sho Miyake.

You were talking about this affection for young people, you are both passionate about the complexity of relationships between young people, and  with two different careers, different conceptions, how did you manage to create something that looked like you both ?

Kazuhiro Sugawara: When I chose Miyake, I knew I had to give him as much freedom as possible, I didn’t give him a lot of directions. Besides, I let him choose the teams and the actors. What I tried to do was to guarantee the best shooting conditions

As a producer, what difficulty did you feel in adapting a novel to a film work? On a contemporary era?

Kazuhiro Sugawara: Indeed, the change of era  lead us to some difficulties. The end is very different i in the film since the end of the novel seemed a little inadequate for our time. So with Mr. Miyake, we talked a lot and we decided to change the ending.

Do the characters embody a form of hope that is no longer found in contemporary Japanese youth today?

Kazuhiro Sugawara: I don’t know if we can talk about hope, but I think that Mr. Miyake tried to shoot the young generation as they are today and to have a very intimate look. Besides, I completely agreed with this desire. It is up to the public to find hope or not.

What messages do you want to convey to the youth who is watching this film and identifies with it?

Kazuhiro Sugawara: When I was young, going to theatres to watch a film was something very precious. I hope that young people who come to watch the film can have an easier environment. This is something that I can testify from my experience as a spectator.

How do you want the French audience watching the film to receive it?

Do you think that in Japan, young people and the audience watching the film ultimately identify more easily with characters they see them on screen rather reading a book?

Kazuhiro Sugawara: Yes, absolutely. The novel is a completely independent work even if it was written 40 or 50 years ago, I think there is still something that can be understood nowadays. Those are two different works.

In your work as a producer, trying to understand all these complexities, have you felt that in Japan, young people experience a feeling of giving up on themselves and on society?

Kazuhiro Sugawara: When I was young, when I was under my twenties, I had the impression of belonging to nobody or nothing. Perhaps it is still the same among young people today. For no reason, I believed that tomorrow would be better than today. I would like young people to be able to share the same opinion, even if it is very difficult when we look at the news these days. So I wish there was hope, but I can’t really speak on behalf of them.

Do you have a special anecdote during the shooting of the film, something that would have changed your conception of the shooting or your interpretation of the book you want to share with us?

Kazuhiro Sugawara: After a week of shooting, the actors and extras shared alcohol, and even the team, they pretended to be loyal customers of a place. Even the actors, cameramen and technicians put down their equipment and all danced once before starting to shoot. It allowed the actors to be more free when they were playing this scene.

Do you have an important message to convey, something you haven’t said yet but you think is important?

Kazuhiro Sugawara: As I said, I have a small cinema in Hakodate. By producing films, I became aware that it helped to animate [bring joy] the city. There are fewer and fewer cinemas in Hakodate, but these films have achieved to bring more spectators and more tourists. Those who have seen the films have apparently felt the urge to come and visit the city. There are also foreign tourists, more than before anyway. And as a resident of Hakodate, I am delighted with these observations.

We would like to deeply thank the Kinotayo festival’s team, Xavier Norindr from Crosslight, and the interpreter.