Let’s launch the festivities for the feedback of the fourteenth edition of the Japanese contemporary film festival Kinotayo with this very first interview! Born in 1975, Sato Yoshinori makes independent cinema his asset: after being fed up to ‘cinema studies’ at the University of South Carolina in the United States, he began his career as an independent director with a first feature film shot in 2013, entitled Bad Child, which raises awareness about the breakdown of family ties. Her Mother then followed in 2016, another feature film subsumed by a societal reflection, and not least, the heavy subject of capital punishment in Japan. Eager for even more discovery, he embarked on the production of his first documentary around an emblematic character of the subordinate culture district, Shinjuku Tiger. For almost 50 years, the man in the disguise of a tiger has been wandering the streets of Shinjuku, a district he has endless expertise, a district that went through a great number of counter-cultures. Yoshinori Sato takes the speech to tell us about the magical birth of this insurgent documentary!

Hello, can you start by introducing yourself ?

Yoshinori Sato : My name is Sato Yoshinori. I was born in 1975, I come from Aichi prefecture, which is located in around the center of Japan [laughs] and I started my cinema studies at the University of South California, United States. [Shinjuku Tiger] is my third movie and my first documentary screened during the Kinotayo festival.

Before speaking about Shinjuku Tiger, can we come back to your path, through Tokyo Boy and Her Mother, two raw but sublime performances, depicting the breakdown of family ties. How do you explain this interest for family bonds and do you think this is representative of the domestic situation in Japan ?

Yoshinori Sato : Indeed ! First, the family was the main topic of my first film and I wanted to demonstrate, through those two movies that the current Japanese family system is quite dysfunctional.

This year, for the occasion of Kinotayo festival,  you are introducing a completely new movie, Shinjuku Tiger, which praises ‘joie de vivre’, can you please tell us more about it ?

Yoshinori Sato : Actually, at the beginning, I did not know much about Shinjuku Tiger. A distributor told me about him by showing a photo, and I immediately felt about meeting him…  My curiosity was aroused. First, I was thinking about shooting a more serious film but I met him and learned that he has been Shinjuku Tiger for over 45 years and I was thinking about telling the story of Shinjuku. And rather than making a documentary as I was aiming to, talking with Shinjuku Tiger, who is cheerful and talkative made me revise the tone of the film. My two previous films were also depicting people standing against society ! In Her Mother, for instance, the main character opposes the capital punishment [whereas] in Tokyo Boy, nowadays entitled Bad Child, it looks like Shinjuku Tiger : someone opposes the current society, so there are common features between those three movies.

Scenarist, director of photography, director, how did you manage the difference of point of view, thanks to Shinjuku Tiger, letting yourself be driven by the movements of the shooting ?

Yoshinori Sato : For this movie, I made everything by myself, I did not then make the distinction between the functions. I discovered about Tiger through a camera, like a cameraman with camera shots ! But for me, I feel like… I was someone following Tiger and I did not want the shooting to be a burden. By contrast, the editing was different : I had to look at it objectively.

At first, you assumed that you were going to film someone extraordinary, original, authentic before realizing you were simply following someone in his daily life. Explain to us a little about this evolution of your perception of the extraordinary!

Yoshinori Sato: When I started filming him, I had absolutely no knowledge of him, so I thought that maybe the main subject of my film would be who is Shinjuku Tiger! But as you saw, he wears an extravagant outfit which I wanted to highlight, but I told myself that it wasn’t really that, I just had to show him as he is and leave the imagination to the audience…  As I was spending time with him, I began to know him more… [laughs] even if he never said verbally why he did certain things, I started understanding his expressions a little. Then, his personality. And there you go, that may have influenced the structure of the film.

For you Sato-san, who comes from Handa, you traveled with Tiger around Shinjuku. Has your perception, your relationship to urban space, to the city changed?

Yoshinori Sato: Indeed, I grew up in the countryside. But after making this film, I told myself that even in big urban cities, people live in a normal way and of course we often say that people in big cities are close-minded, but there is also a humanity that I discovered … and I thought it might be easier for the culture to be born in a large city considering that in the countryside, people have roughly the same values, but in huge cities, there are many different people who do not have quite the same values. And it is a mixture of these different values ​​that engenders the culture.

Yoshinori Sato: We have a point of view before the shooting, like a kind of prejudice and inevitably we are a little upset when we really shoot but it’s also a pleasure to shoot… [laughs] I need to remember, it will come back to my mind. 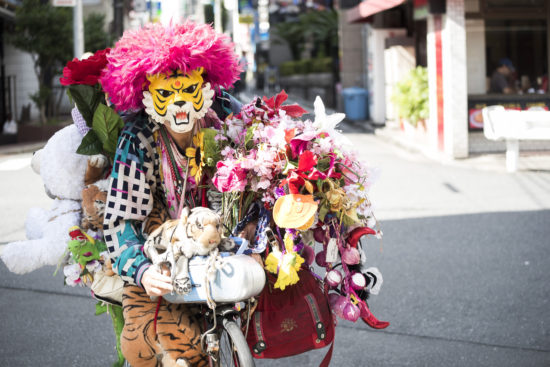 Finally, what message do you want to deliver to the people who watched the film and also to the youth who sees Tiger as a figure of admiration?

Yoshinori Sato: For the message to the public, it’s very clear, I would like the public to watch Tiger and feel something … Otherwise a message for both the public and the youth who admire him, in fact Tiger is … someone who has been doing something for a very, very long time and I think it is something very difficult to do. Besides, men are quite fragile: there are many temptations around us. Believing in something is really difficult in our time … so showing someone who can do it might give them hope and make them believe they can do it too. There is also the fact that I would like these young people to learn a little more about stories, for example in the film, we learn about what era he was born and the society in which he grew up, especially after the war. I would like them to learn how Japanese has evolved.

Yoshinori Sato:  I do remember one now! It’s not much, but when we were filming, I met a woman who told us that she had a crow as a domestic animal when she was young and that it was really domesticated , very kind, that he clung to his hand. Right after that meeting, Shinjuku Tiger turned to me and asked, “Did you catch that? “. Actually, I realized that as a norm we tend to be afraid of the crow of which we have a negative image. But Tiger likes to have different values ​​and admits that we can have different values. When he asked me if I had filmed it well, in reality I had not! We often thought about having a drink together for seven hours or eight hours, so it was impossible to shoot from the beginning to the end. Sometimes I even pretended to be shooting while the camera was off. And at that time, I told myself “damn, maybe I should try to film it, to shoot with the camera as long as possible”.

Tiger, watching your film, how did he react?

Yoshinori Sato: He was delighted with the result, he just said “Great!” [Laughs]. He called me a magician who brought magic to this movie. I come back to everyday life a bit. At first, I wanted to explain the reason why [Tiger] started this type of performance. But I told myself that if I showed that, maybe the public would already think that they had assimilated the character and that we were going to have to stop, which should not be done. He is someone who puts on this “mysterious” side, a little magic to his own character. It’s also an artistic staging of his character. He’s the one who makes people think. I figured I had to do it the same way, let the audience think, imagine and that’s what I did.

Our deepest gratitude goes to Xavier Norindr and the company Crosslight for inviting us to this interview, to the Kinotayo festival, to the festival interpreter as well as to Yoshinori Sato for this delicious meeting.