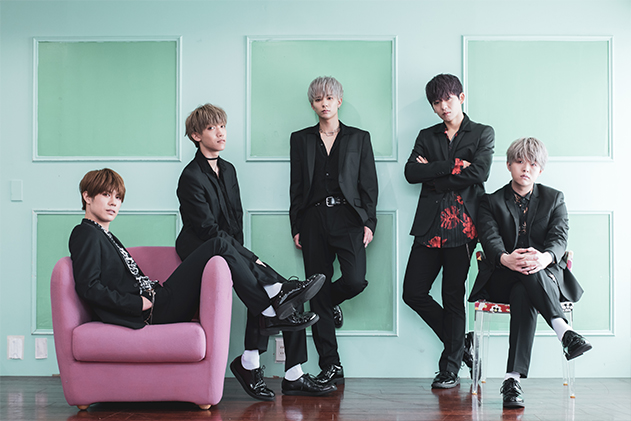 Do you know the Japanese band ADDICTION? If not, you will quickly find out a little more about it and its members! If you already know them, you may be able to learn new things with their answers to our questions below.

ADDICTION is a Japanese group made up of five members: ASCH, MYUJI, K.B, TAKT and JOSHUA. They started in music as a group in June 2014, but the band was not exactly the same as the one we know today. MYUJI and K.B are therefore original members, but ASCH and TAKT arrived in January 2018. They will then perform live performances together, in Japan of course but also in a few other Asian countries including Indonesia. JOSHUA will complete the group a few months later, in September 2018.

Could you please introduce yourself to our readers?

K.B: We are a boy group of five, we are all Japanese and we are called ADDICTION. We sing, rap and dance. We debuted officially on October 30th under Universal Music. We write and compose all our songs. Lyrics, raps, dances, we do it all. Our goal is to create songs that could touch the heart of our audience. The fact that we have five very different personalities can be felt in our music and it’s our charm.

For you, what word or expression would describe better your group?

K.B: Open (our heart to others). I think we are a group with whom you can feel close to, in a sense that we try to share our personalities daily through our performances, live shows and social medias.
TAKT: Maybe the word: individuality. While we all listen to very different music styles with different meanings and significations, I think we succeed in uniting together towards one unique universe.
ASCH: Human warmth. In my opinion we make people feel like they are part of a family during our lives or while MCing for example.
MYUJI: Dancers, singers. I want people to think that ADDICTION is a boy group that rules.
JOSHUA: Passion. Each of us have in our heart passion and confidence which transpires on stage.

In terms of music, what artists or style of music inspires you?

K.B: Personally, I listen to a lot of KPOP. Recently, I really found inspiration in the performances of BTS, WANNA ONE and SEVENTEEN.
TAKT: I listen to a lot of JPOP, I love how the world is showed through the music and we can feel how meaningful the Japanese language is through it.
ASCH: I love the artists that can make me move on their music and the world they show through it.
MYUJI: I love KPOP, I think, I am greatly influenced by this style of music. I take my inspiration in it when I write rap or produce the choreography.
JOSHUA: I like the rhythm and sound of western music, that’s why I get really inspired by it.

Which artists gave you the desire to pursue a career in music?

K.B: I started to work on music thanks to my love for KPOP. I knew that’s what I wanted to do watching XIA Kim Junsu from JYJ, formerly a member of TVXQ/DBSK.
TAKT: At the time, I became curious of making music thanks to EXILE, but the one that really influenced me was AI with her song “Story”. She is the one who made want to touch people’s heart like that.
ASCH: My passion started thanks to the songs of Shunsuke Kiyokiba.
MYUJI: By watching TVXQ/DBSK and Girl’s Generation/SNSD, I started wanting to be part of a group as a singer and dancer. Nowadays, I particularly like the dance style of Taemin from SHINee.
JOSHUA: When I went to go see BIGBANG’s show, I knew that’s what I wanted to do. I told myself that’s what I wanted too, to dance and sing like that.

Which of your songs is the most representative of your musical universe?

MYUJI: It’s hard to limit to one song, but, in my opinion “Party in the sky” or “Addiction party” are the songs that everyone can dance to. I think that this is in these songs that you can hear each member particular vocals and are the most interesting.

What message do you want to send to the people that are listening to your music?

ASCH: When someone listens to one of our song, we want that moment to be remembered for a long time. Considering that the songs are better live, we want them to want to see us live.

Which songs of yours would you recommend discovering you through?

TAKT: No surprise there, I recommend our last single “Further way/Destiny”! I wonder if it’s not one of the CD where we feel the most our philosophy.

What are your feelings about officially debuting?

ASCH: Thanks to each member, we now are part of the big people of music. I think that the serious stuff will be happening from now on.

Could you tell us more about your first single under a major record label? Has the recording been different and in which ways compared to before?

JOSHUA: We decided from the beginning that we wanted our single “Further way/Destiny” to have two versions.

Could you tell us about the most memorable experience or memory of you career?

With which artist would you like to collaborate in the future?

JOSHUA: I would like to work with foreign artists, like Billie Eilish or Bruno Mars for example.

Which of your music video was the hardest to shoot?

MYUJI: For me it was “COME BACK TO ME”, because we were changing the choreography until the morning, we started filming.

Which song do you like to perform the most on stage?

TAKT: “Party in the sky” is the main song of the album, and I greatly recommend people reading this interview to listen to it and feel the catchy rhythm. By the way it’s the song that had the biggest success on YouTube.

At which age did you start creating music? Besides your music career, what do you do on your spare time?

K.B: I started music, just before debuting with ADDICTION, 6 years ago. On my off-days, I like to travel, not only in Japan, but also abroad.
TAKT: I started to work on music, full-time, at the age of 19. During my free-time, I watch idol videos and anime.
ASCH: I began creating music 10 years ago, I was 18. I like to play games online of my spare time.
MYUJI: I started music in 2011, 8 years ago. I sleep when I have free time.
JOSHUA: I began music with ADDICTION, around a year ago. Before that I didn’t sing or dance. On my spare time, I like shopping for clothes online, watching movies or cooking.

What job would you have done if you weren’t an idol?

K.B: Maybe a baseball player, or a baseball trainer.
TAKT: Before debuting in ADDICTION, I worked in public services, I would have probably kept going this way. But as I have loved the entertainment industry since I was a child, I think that I would have tried another artistic domain.
ASCH: At first, I wanted to be a construction worker. So, I think I would have worked on a construction site on top of scaffoldings.
MYUJI: Voice actor. I think that if I have the occasion one day, I would work in this area.
JOSHUA: As I love western fashion, I wonder if I wouldn’t have become a designer or I’d want to be a globetrotter. I want to see different sides of the world. There are a lot of things that I would like to do in the future.

Which country would you like to visit? And why?

ASCH: The United States. It’s a dream I have since I was a kid, I would love to visit the country of liberty.

Do you know any French words?

TAKT: Basic words like “Bonjour” or “Délicieux”! I intend to learn a little more in the future.

Is there any French dish you would like to taste?

JOSHUA: I would like to taste how the French cook their game. Like deer, rabbit or frog.

Do you have any last word for your French fans?

MYUJI: We will do everything to come to France one day! Nothing will make me happier than our French TRIP listening to our music until we can come! “Je t’aime” (said in French)

Lot of thanks to ADDICTION’s members and their team for allowing us to carry out this interview.
Our thanks also to Yuki Nun who allowed us to create contact with the band.
We finish with Ya-El B and Salem Rendis who gave us great help for the translation!